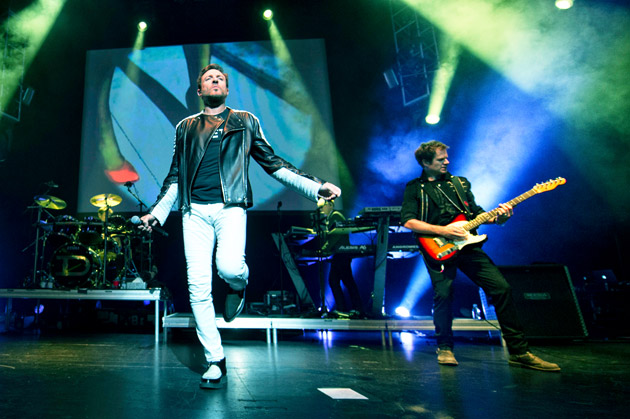 Simon Le Bon promised a set of “politics-free entertainment” and “just pure fun” during Duran Duran’s concert at Barclays Center in Brooklyn on Tuesday night. But that was after the band had opened the show with “Paper Gods,” the title song of its 2015 album and an indictment of the power of money and how “all the fools in town are ruling today.” Lest anyone miss the message amid the dance beat, the video backdrop included lyrics.

Duran Duran has always been dedicated to superficial pleasures while intermittently concerned with weightier topics. It still has core members from its 1980s heyday: Mr. Le Bon, Nick Rhodes on keyboards, John Taylor on bass and Roger Taylor (who is not related) on drums. During the ’80s, Duran Duran was a staple of MTV: handsome, preening British lads smiling and singing synthesizer-driven tunes about glamorous seductions. But Duran Duran also offered glimmers of media criticism in ’80s hits like “Girls on Film” and “Notorious,” and by 1993 it was complaining about “Too Much Information,” a song it performed on Tuesday: “Destroyed by MTV, I hate to bite the hand that feeds me,” Mr. Le Bon sang. “The pressure’s on the screen to sell you things you don’t need.”

Near the end of the concert, Mr. Le Bon turned serious again as he introduced “Save a Prayer,” a ballad about a one-night stand. Eagles of Death Metal had performed it with Duran Duran in October, and played it at the Bataclan in Paris before the Nov. 13 terrorist massacre there. Mr. Le Bon said that the song should “stand as a beacon to show that music is a way of bringing people together, that people are good and that we will not live in fear.”

But no one comes to a Duran Duran show for profundities. Peppy, silly hits like “Rio” and “Hungry Like the Wolf” had the Brooklyn audience dancing and singing along, ignoring some scratchy edges in Mr. Le Bon’s voice. Decades later, the band is still aiming songs toward the dance floor, using a pumping EDM beat for “Last Night in the City” and testing a disco revival with “Danceophobia”; the guest performers on those tracks, Kiesza (singing) and Lindsay Lohan (speaking) respectively, joined the band onstage.

For a British synth-pop band, Duran Duran has a surprisingly strong affinity for funk, one thing that has made its songs durable. It shared the bill at Barclays with Chic, led by the guitarist, songwriter, producer and longtime Duran Duran collaborator Nile Rodgers; he joined Duran Duran for “Notorious” and a 2015 song, “Pressure Off.” Chic performed its disco-era hits along with songs that Mr. Rodgers wrote and produced for Diana Ross, David Bowie and Sister Sledge. Along with the celebratory lyrics and cunning hooks, one component gleamed anew: Mr. Rodgers’s rhythm guitar. Scrubbing, tickling, spreading thick jazz harmonies or jabbing hints of the blues, it was structure as sheer elation.

Previous Article
Duran Duran Pays Tribute to David Bowie, Shares Stage with Lindsay Lohan in Brooklyn
Next Article
Backstage with Duran Duran at Barclays Center
News
Back to all news