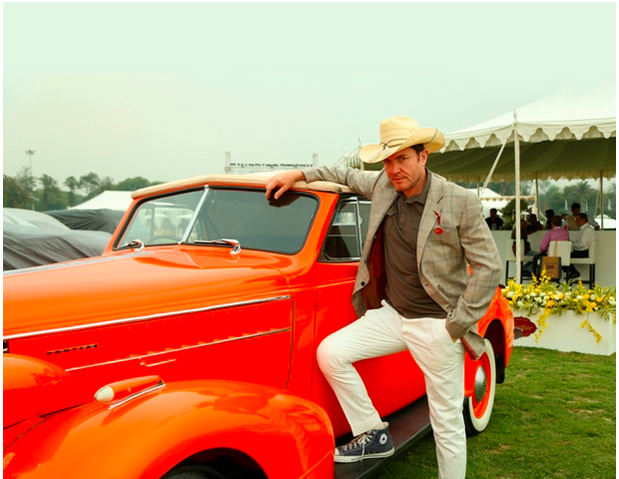 With age, Simon Le Bon finds that “imperfections start to become more interesting than the perfections” and some of that should come through on Duran Duran’s upcoming album, which he believes will be out by September. In his 2012 memoir In the Pleasure Groove: Love, Death & Duran Duran, bassist John Taylor recalls meeting Le Bon for the first time: “I can’t forget what he was wearing…skintight leopard-print ski pants with loops under the boots. Undoubtedly a dubious look, but, you know, he was studying Shakespeare.” In various interviews, the band members have agreed that Le Bon’s look had a lot to do with deciding if he would make for a good fit, when he auditioned back in 1980. At the height of their fame, the pop icons were proponents of the glam invasion, from playing muses to Andy Warhol to bordering on the camp aesthetic. Even though their stylings weren’t seminally singular, Duran Duran convincingly straddled the line between gauche and refined.

At the Jaipur Polo Grounds in Delhi where he is judging a Cartier event for vintage automobiles, the 56-year-old is wearing white cotton pants, a light-colored print shirt and a summer hat. Despite the crisp attire, he looks slightly beat. This is his third trip to the country, and he says he has mostly just indulged in “luxe tourism” so far. The singer-songwriter is in no mood to revisit the bygone days and informs that they have just come out of a two-year recording and mixing session for the upcoming album. Producer Mark Ronson, who worked with the band on All You Need Is Now that was released in 2010, has reprised his role on three tracks for the as yet untitled album.

Ronson’s vision for the band also seems to have caught on. With All You Need Is Now, the producer wanted Duran Duran to create a follow-up to Rio (1982), which he believed was their best album. Le Bon clarifies that Ronson did not exactly mean for them to rewind to that time. “It was more a question of, ‘We listen to bands like The Killers, Bloc Party, Franz Ferdinand even, this is Duran Duran’s territory, I want you guys to own this, this is you,’ and we kind of understood that and it was easier to write that kind of music,” he says. On the new record, Ronson is joined by the legendary Nile Rodgers, who collaborated with Duran Duran on hits like “The Reflex” and “The Wild Boys.” English producer Mr Hudson has also worked on the record.

But the band will not be taking the same direction as All You Need Is Now, which Le Bon believes was more “retro sounding” and they’ve moved on from that. The music video for “Girl Panic,” from the album was something of an Eighties throwback sharing super models like Naomi Campbell and Cindy Crawford in roles faintly reminiscent of George Michael’s ‘Freedom! 90.’’ The classic Russell Malcahy music videos also played a very significant role in helping the band capture the imagination of their
fan base.

As Le Bon struggles to articulate the nature of their next, he says that “it feels stronger” and will be more “natural sounding.” There might be some refreshing surprises on lyrics as well, as Le Bon says it will be a bit of departure from their earlier songs, and while they might still have tracks about love, it will be a different take: “There are some twisted love stories in there, as you get older you see these things do get a bit twisted.”

Another very interesting facet of the sound, which we don’t get to experience much of on Duran Duran albums is Le Bon’s love of spacial recordings. “We’ve stripped a lot of sound out, to give it some space,” he says. “I am a fan of space, I am a fan of silence in music. When you hear something that has only got three or four things going on at the same time, you get this feeling of openness, and I like that, it can sound a bit scary but at the same time it gives you a sense of freedom.” For now, this could be perhaps sampled on the Duran Duran covers album, Making Patterns Rhyme: a tribute to Duran Duran (September 2014) in which artists like Moby, Warpaint, Carina Round, have put a spare and haunting spin on some of the band’s songs.

And working on a new album doesn’t come as a breeze after three decades of working with the same crew, Le Bon reveals. “It is a challenge to get back in the same room with the guys…Sometimes you know, when the rest of the band argue with me on lyrics and things like that, I do say to myself, ‘Is it really worth it?’” he says with mock exasperation.

In the very near future, the band is set to perform for the David Lynch Foundation anniversary in Los Angeles on April 1. They will be collaborating with the inimitable Angelo Badalementi, and the lineup will also feature the likes on Sky Ferreira, Zola Jesus and Moby. When I ask Le Bon about working with Lynch on their 2011 concert film, Duran Duran: Unstaged, he is all reverence.

“We just turned up at LA near the Lion theatre, he had a studio booked and we actually talked about what we’re going to do on film, and he asked a lot of cookie questions and filmed us giving our replies, and we kind of talked about it. I mean, it’s David Lynch, you don’t try and second guess David Lynch, if you’re lucky enough to work with the guy, you just basically accept whatever he does throw at you.”