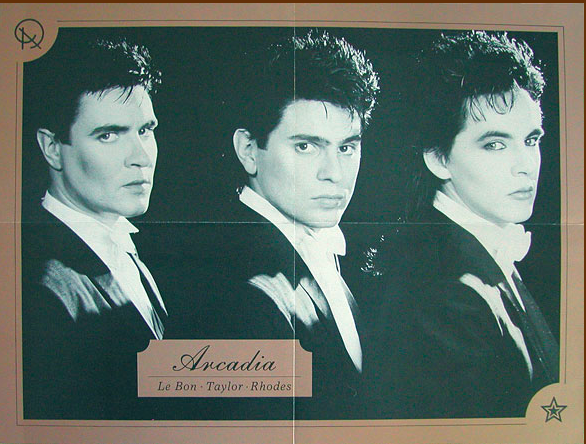 "I am on my way to Manchester for the first date of our UK tour, which is something we’re all really excited about. There has been a lot going on these past few weeks, but Katy mentioned it was the 30th anniversary of Arcadia’s “So Red the Rose” in the middle of November. She asked me what I thought when I looked back at that time.

Forming Arcadia was really a reaction to the anxiety over what was going to happen with Duran Duran. There was a lot of uncertainty. John & Andy had formed Powerstation, and Nick said, “Come on, we have to do something.” In what seemed to be a very quick decision, we got in to an extraordinary studio in France, and tarted working on the album from scratch. Roger had a foot in both camps but he was very much part of Arcadia. Fortunately, we found a rhythm in no time. We recorded the whole album in about 4 months, pretty quickly for us, especially since we walked in to the Studio cold. I had written the song “Missing” years prior, and it ended up being one of the last tracks we recorded on “So Red the Rose.” It was such a long time ago, I don’t remember what songs we wrote first, but I do know the lyrics took me a long time.

It was an amazing experience making that album. Paris was a really happening town at that time; Sting, Herbie Hancock and Grace Jones were all on tour or visiting, and every one wanted to come to the Studio. After we saw Sting live, he came over to the Studio to see us. Same with Herbie - we got a message to him and he said “I’d love to come down.”

We asked Grace, who was hilarious - I had written that middle section from “Election Day" from scratch the day she came down. She isn’t a lyricist, so i wrote it for her very fast, and it was in that slightly vague style I used to write in. Grace said “Simon, what the fuck does this mean? What is it about??”

Those collaborations made the record fantastic, and I feel like “So Red the Rose” was very much ahead of it’s time, and it still holds up. Arcadia is an important part of Duran Duran history - we often play “Election Day” live, and there was talk about adding in “Lady Ice” to this current tour's set list, but it was another mid-tempo number so it didn’t make the cut. Maybe some day."