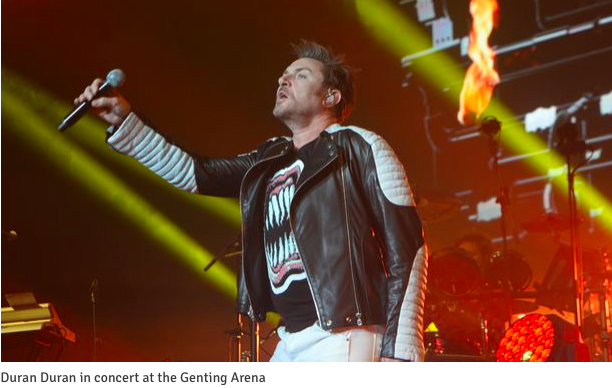 “Birmingham, put your hands in the air and feel the love,” said Simon Le Bon.

It’s true, there was a lot of love in the Genting Arena as we welcomed our boys back for their homecoming gig.

Simon even got a bit emotional as he said: “It’s great to play here, it’s the greatest crowd. And we are your band!

“Thirty-five years ago we played in a club on Broad Street, where the health spa of the Hyatt is now, and dreamed of this.

“We count ourselves incredibly fortunate to be here in front of you.”

And he got a big cheer for saying of Birmingham: “It’s still my favourite ever accent.”

It was good to hear tracks from that album Paper Gods, especially the comeback single Pressure Off (with guest artist ‘son of Birmingham Mr Hudson’) and the upbeat Last Night in the City.

But there was a bit of a lull in the middle when they played the slightly bland Only in Dreams and Love Voodoo.

Then again, maybe their ageing audience of mostly forty and fifty-somethings appreciated the chance of a sit down.

But the arena really erupted during the classic hits like Wild Boys, Hungry Like the Wolf and Planet Earth.

Clad in tight white trousers and bouncing around the stage, Le Bon still has enough energy at 57 to drive an upbeat concert, especially during songs like their version of Grandmaster Flash’s White Lines.

Still, I could forgive them anything by the time we came to the spine-tingling, singalong, sway-along highlight that was Ordinary World.

That was only outdone by the brilliant encore of Rio and Save A Prayer.

The latter is being re-recorded and released for charity by Eagles of Death Metal after the Paris massacre happened during their gig.

Simon said: “The whole world seemed to change three weeks ago tonight and we can’t carry on without mentioning that.

“Music can heal. Switch on your phone lights and feel the love and positivity. Never give in, never give up.”

The resulting sea of shining lights, swaying to the goosebump-inducing Save A Prayer, was an experience to linger long in the memory.

To quote their latest single, What Are the Chances of Duran Duran lasting another few years? On this form, pretty high I’d say.

Previous Article
‘I’d Love to be a Kung Fu Master like Bruce Lee’: Simon Le Bon gives his Definitive Answers to Our Most Probing Questions
Next Article
Duran Duran Back in the Midlands for Tour and to Celebrate New Album
News
Back to all news