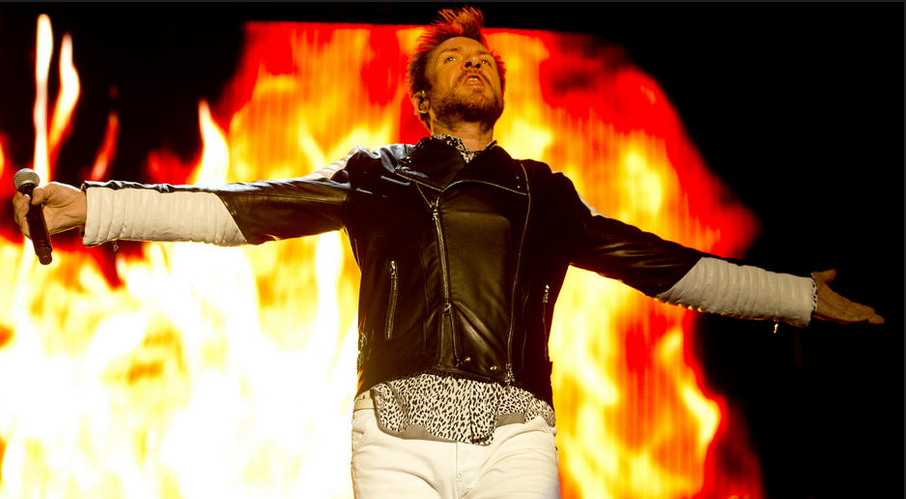 With all of its members now in their mid-50s, British new wave band Duran Duran is hardly “the wild boys” it sings about in its 1984 chart-topping hit of the same name.

But its concert Thursday on Musikfest’s main Steel Stage on the massive Bethlehem music festival’s preview night showed Duran Duran fit and in fighting trim, playing a show that surrendered nothing to age nor the 34 years since it became the prototypical 1980s video band and ruled the airwaves.
Duran Duran at Musikfest

So the lyrics to “The Wild Boys” – which opened the show, by the way -- actually set a blueprint for the show. Here’s how:

The wild boys are calling/On their way back from the fire: Duran Duran played all of its 15 songs as if they were vital and remained popular, and for the most part they are. And the band emphasized it by playing some of its biggest hits early, and playing them well – tight and sharp.

After “The Wild Boys, the second song, “A View to a Kill,” boomed with a kick. “Come Undone,” a hit from 1993, had similar intensity in a slower burn. And its No. 1 gold hit “The Reflex” still sounded really good – and the band even slightly updated it with some electronic effects from Nick Rhodes and burning bass from John Taylor.

In August moon's surrender to a dust cloud on the rise: In addition to its biggest ‘80s hits, Duran Duran showed that some of its later material holds up, too. An early pairing of “Girl Panic!” tied tightly to “All You Need Is Now,” both from 2010’s disc that shares the title with the latter song, were surprisingly good – the latter with its industrial power and singer Simon Le Bon hitting a good, big note. Which leads to …

Reckless and so hungered/On the razors edge: Le Bon’s voice was every bit as good as it was back in the day – clean and sharp from the start, soaring on “A View to a Kill” and hitting a high, strong on the 1982 deep cut “The Chauffeur.” But Le Bon was best on the slow centerpiece “Ordinary World,” starting out singing strongly, then finishing in a falsetto. The song also benefited from a ripping solo from tour guitarist Dom Brown.

It wasn’t only Le Bon’s voice. The singer danced on a handful of songs.

In a sore afraid new world/They tried to break us/Looks like they'll try again: “Pressure Off,” the first single from the band’s upcoming new album “Paper Gods”(due out Sept. 11), showed the band is, indeed, still relevant. It was very funky – perhaps rocking lighter, but more fun.

But the bigger surprise was how fresh even older songs sounded. The 1986 hit “Notorious” was far funkier than remembered, also thanks to Brown’s scratchy guitar and added sax. “Planet Earth,” the band’s breakthrough song from 1981 held up surprisingly well.

Wild boys never lose it /Wild boys never close your eyes: Duran Duran saved some of its biggest hits for the end, but “Hungry Like the Wolf,” the main set’s penultimate song, was one song that seemed to lose a bit of its edge. It still was good, and Le Bon spit out the words.

The main-set closing “(Reach Up for the) Sunrise,” sounded the most dated, even though it’s from 2004. But most 1980s bands playing today would be happy for a song of its caliber, and the crowd of 4,489 (the band sold out Musikfest's smaller RiverPlace main stage in 2000) clearly enjoyed it – taking its admonition literally.

Wild boys always shine: The encore’s opener -- a cover of Grandmaster Flash’s “White Lines” – was really a surprise: sharp and funky and fun. Le Bon had fun with it, and Brown added another ripping solo.

And of course the band closed with a wild and fun “Rio” that stretched to seven minutes.

Perhaps the only other complaint was the show’s brevity – just 75 minutes and a set that left out such hits as “Girls on Film” and “Union of the Snake.”

If the worst that can be said about the show is that listeners wanted more, perhaps Duran Duran are still the wild boys after all.