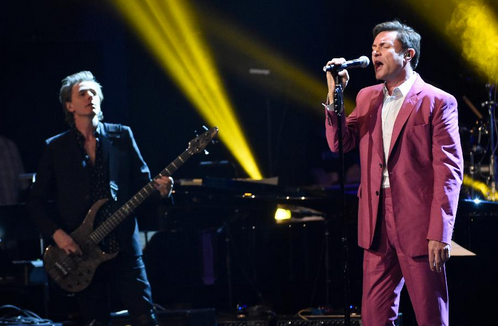 Truly, there could be no more apt adjective than “Lynchian” to describe Wednesday’s Music of David Lynch tribute concert in downtown Los Angeles.

Taking place in front of a customized Shepard Fairey backdrop at the darkly opulent Theatre at Ace Hotel, and benefiting the eccentric director’s eponymous foundation (which provides Transcendental Meditation programs to at-risk adults and youth), the surreal evening began with stool-seated folk legend Donovan gloomily crooning Elvis Presley’s “Love Me Tender” accompanied by spaghetti-western strings; climaxed with Duran Duran hosting an ’80s dance party with Simon Le Bon looking matinee-idol-handsome in a candy-pink suit; and wrapped with Donovan strumming a lone guitar while Lynch recited a “verse of unknown origin,” wishing the audience “may you all be free of disease” in his distinctively reedy, Family Guy-familiarized drawl.

It was, of course, one of the best things that the night’s musical curator, Lynch himself, has done since Wild at Heart — or at least since his last voiceover cameo on Family Guy.

Lynch’s longtime composer Angelo Badalamenti was also on hand to play a few pieces from the Twin Peaks and Wild at Heart scores… although his most entertaining moment came when he shared an anecdote, told to him by Paul McCartney, about Queen Elizabeth II leaving her birthday party early (before Sir Paul’s specially commissioned performance) to go upstairs and watch Twin Peaks in her palace bedroom. “True story,” Badalamenti said, and everyone in the audience believed him. When it comes to David Lynch, after all, anything is possible.

One of the liveliest moments of an evening of otherwise languid mood music came courtesy of Moby, who banged out his “Laura Palmer’s Theme”-sampling EDM classic “Go” on bongos. And the Flaming Lips, fresh off Monday’s all-star tribute concert for Brian Wilson (at which they played “Good Vibrations”), brought on the trippy vibrations with a creepy-cool, Zaireeka-style pastiche of Eraserhead-inspired noise (actually a soundscape of construction-site racket recorded by Lips mastermind Wayne Coyne that morning in downtown L.A.) and a sonically tweaked reading of Alfred Lord Tennyson’s poem “Nothing Will Die” (from The Elephant Man's tragic final scene).

"It’s an honor to be part of David Lynch’s taking over the world," Coyne declared as he crouched at the edge of the Ace stage, twiddling knobs.

But it was Latin American singer-songwriter Rebekah Del Rio, recreating her Mulholland Drive cameo, who made one of the biggest impressions while barely making any noise at all. Demanding “silencio" as she appeared onstage, she sang her Spanish-language version of Roy Orbison’s "Crying" a cappella, flawlessly. The wild audience ovation that followed was actually one of the noisiest moments of the night.

Julee Cruise, perhaps the most famously Lynch-affiliated chanteuse, was set to close the show with her Twin Peaks track “Falling,” but she was an unexplained no-show. While her absence was disappointing, this only gave the aforementioned Duran Duran, whose dreamlike 2011 concert film Unstaged was directed by Lynch, more time to play three full songs: the noirish “Chauffer,” plus the bonus encore of “Hungry Like the Wolf" and "Ordinary World."

Le Bon raved about the very unordinary world that Lynch has long created onscreen, telling the delighted audience: “We grew up in small towns in England, and for a lot of kids who went to art school, there was one film that stood out in our minds, and that was Eraserhead.” Le Bon also reflected on Duran’s Unstaged experience, saying Lynch “redefined the art of filming a live show” and joking about the bizarre “sausage scene” during Unstaged's “Come Undone” sequence.

At the end of the epic evening, Lynch appeared, grandly intoning: “May everyone be happy. May everyone be free of disease. May auspiciousness be seen everywhere. May suffering belong to no one. Peace.” Really, every rock ‘n’ roll show should conclude with a David Lynch recitation. The world, ordinary or otherwise, would be a better place.