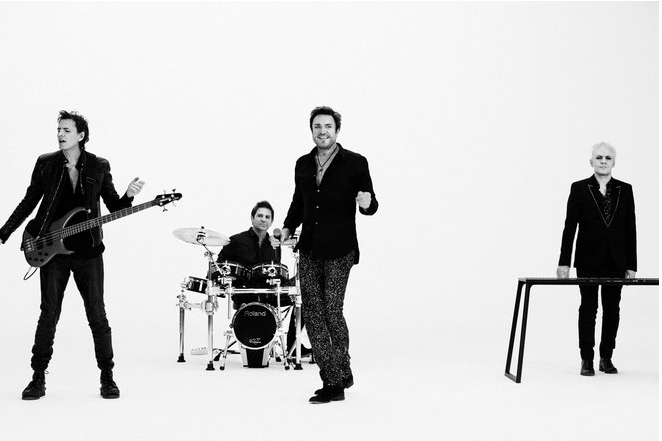 Duran Duran might have captured girls on film, but Vogue.com has got keyboardist Nick Rhodes on tape as the band drops its 14th album, Paper Gods, today. Looking good “was definitely in our mandate,” says Rhodes of the band, which formed in Birmingham in 1978. Since then, their style and sound has never stopped evolving. “Every change that happens around you gets taken in somewhere and reflected,” Rhodes says. Here he waxes nostalgic about David Bowie, eyeliner, and frilly shirts, and fills us in on his favorite contemporary designers, Saint Laurent’s Hedi Slimane included.

How have you approached style as a band?

When we formed Duran Duran, it was really a melting pot of new wave, mixed with electronic dance music, disco, and glam rock. It was all the things we knew as teenagers, and we somehow wanted to make a hybrid to create our own sound and our own look, to launch ourselves, and we knew we didn’t want to do anything that wasn’t stylish. With the background we’d come from, we wanted something that was going to have a strong visual impact.

We always chose our own clothes and put things together ourselves. I remember the first time we encountered a stylist was the late 1980s. We hadn’t had a clue that people like this existed. [Before that] it was all very naive. We didn’t really have to think about it. We’d just go and find things that we liked and somehow we grew together. It’s like being in a gang, being in a band. Nothing was manufactured as many things are now. We got together from school . . . . It was definitely in our mandate [to find our own look], but we weren’t looking for something unnatural. We were actually just searching for things that we thought were cool and often we’d find women’s clothes, because actually men’s clothes weren’t particularly flamboyant at that time, so we’d literally go to small women’s boutiques and buy jackets off the shelf or a shirt that buttoned the wrong way for us, but it didn’t really matter. And you’d mix that up with leather trousers that you’d managed to find in Birmingham or from a biker shop or something, and then you’d find a shop like Kahn & Bell, which was a dream, because everything they made we wanted to wear.

Probably [John] and I subconsciously guided where we went stylistically as a band, but everybody in the band, without exception, had their own vision and style. For example, Roger and I always laugh now when we arrive at a photo shoot and there are rails of clothes there. I can literally go through them, as he could, and pick out something: “Oh, that’d be for John; oh, yep, there’s a Roger one there; yeah, that’s mine; okay, Simon will like that” and literally separate them all and when everybody arrives it’s very rare that there’s a squabble over a jacket or a pair of shoes or something because we are pretty much defined in the things that we like. There could be a little bit of a fracas over a Saint Laurent jacket at the moment—that’s for sure.

I read that you have saved all of your clothes. Is that so?

I did save all my clothes. Funnily enough, I have David Bowie to thank, very personally, for this. When I met him, very early on, when I was still a teenager, he’d been a very influential and important artist to me, and certainly to all of Duran Duran. And we met him and he was very charming, and wanted to talk to us about what we were doing, and what the band was about. I couldn’t think of that many things to say to him because I was so surprised that we’d suddenly met David Bowie. But the one thing that came to mind is I said: “What did you do with all the clothes?” because I’d remembered all these astonishing outfits from the ’70s—all that Kansai [Yamamoto] stuff that he had. I said, “What did you do with them?” And he said, “Oh, well I’ve got them all. They’re all in storage, and yeah, of course I’ve kept them.”

It was at that moment that a little bell went off in my head. We’d just about had our first hit. I didn’t know how long the band was going to be around or what we were going to be doing, but I did think to myself: “I’m going to keep all my clothes.” And so from that day very, very early on I have kept everything from the first pieces we had, which were actually made by students at Central Saint Martins.

Who have you worked with, fashionwise?

We came to London and we said: “Hey, where can we go? What’s the place? Where are all the coolish young designers are going to be? We don’t really have a lot of money.” So we went to Saint Martins and gave them a project to design clothes for a new band. And I’ve still got those. They came up with some pretty extraordinary things, actually. I’ve got satin jodhpurs, they are sort of purply-blue satin jodhpurs that are possibly the widest pair of jodhpurs you will ever see, and a little bolero jacket that goes with it.

We worked with a lot of people. The person that we’ve worked with the most is Antony Price, who to me—I’ve said it many times and I’m going to keep saying it—is THE most underrated British designer. He’s an absolute national treasure. And I think because he never got some mega backing financially that a lot of the other designers did, he’s almost the most pure artist of all of them, to me. We worked with him, because we were aware of his work with Roxy Music, particularly. He did all the suits that we wore on the Rio album art and on the boat. He did the suit that I wore in the “Planet Earth” video, he made our clothes for the last British tour. Antony has been the most constant of the designers that we’ve worked with as a band. Back then there were a lot of other designers out there: Vivienne Westwood we always bought things from; Scott Crolla was another great British designer of that time; there was a store in London called PX which was very new wave, we used to buy things from them.

In Birmingham there was Kahn & Bell, where we got all our early stuff from, particularly the frilly shirts and a number of jackets we wore early on were made, handmade, by them. They were really, really innovative and had fantastic ideas and a lot of their clothes had humor and certainly panache about them.

Then we started to discover the Japanese, so there was Yohji Yamamoto, Comme des Garçons, Issey Miyake—and the French, Jean Paul Gaultier—we wore a lot of that quite early—and Thierry Mugler I was a big fan of, Claude Montana . . . . And then, of course, the Italians: Giorgio Armani, who actually did all our tour clothes for the Reunion tour in 2003; Gianni Versace we used to work with, Dolce & Gabbana . . . .

Stephen Sprouse, a New York designer who, to me, was one of the most influential of the new wave designers. He did a lot with Debbie Harry . . . and he did The Big Thing album and tour for us, [and] he designed a record called Decade, which was our first greatest hits collection. Stephen had a remarkable eye and he was a real multitalented artist . . . . He was very special.

And then Azzedine Alaïa. We didn’t actually do much with him because he always threatened to make men’s clothes but never really got further than pajamas, but we always used to love to go and see his fashion shows. For me, he was the cleverest of the European designers during the period of the ’80s into the ’90s and in fact he still reigns pretty supreme. I saw him a couple of years back now, I went to one of his shows in Paris at his salon and it was as divine as ever.

Who did you work with for hair and makeup?

We always did our own things. With hair and makeup when we did photo sessions there was occasionally a makeup artist but usually we’d do our own anyway. It was more fun that way. When other people did our makeup early on I remember thinking: Wow, that looks really too good, it looks too pristine. That wasn’t really what we were about. It was almost about borrowing your girlfriend’s eye pencil and just smudging it under your eyes and putting some eye shadow on top with your fingers, much more than actually making it look exquisitely beautiful.

Our hairdresser was our guitarist’s girlfriend’s brother at the time, a guy called Mitch, I seem to remember. And he would dye our hair any color any day we requested. You’d sort of have black one day and you’d say: “I think I fancy being blond for the weekend.” And so he said: “I’ll have a go.” I remember going from black to blond and it was an absolute nightmare. It went this incredible orange color, though, and I thought, “You know what? I’ll keep that.” So I kept that for a season.

Your look has been sometimes been described as androgynous, which is a hot topic in fashion now.

When we started the band, it wasn’t something that we necessarily thought about consciously, but it was very much part of the scene that was developing around us—people like Steve Strange and Boy George come to mind who had taken the mantle from David Bowie. It was all sort of just accepted as being part of what we were about. For us, certainly, hair and makeup and clothes styling was very much a part of the character and identity of the band.

Androgyny had come out of the early ’70s again, the likes of David Bowie and one of his mentors, Lindsay Kemp, the mime artist. There was something about it that was appealing in that makeup, hairstyling, clothes; it didn’t seem to matter quite so much whether it was male or female, what mattered was how great it looked.

Pam Hogg I love. I think she’s another of our Great British treasures because she’s completely unique. She’s unlike anyone else, she doesn’t follow trends: She’s just Pam Hogg, and that’s the way we like her. I think her work is beautiful, uncompromising, and just incredibly special.

There are a lot of other British designers right now who I think have done some fantastic work over the last few years. Christopher Kane I think is really one of the leaders; Erdem I like very much too; Jonathan Saunders, Roksanda. People [are] starting to do more interesting things again. Fashion goes through cycles. Sometimes it’s underfunded and it’s very hard for people to actually make a career out of it, and then there are times when it explodes.

Of course Alexander McQueen and John Galliano were two hugely important figures for fashion, and certainly for music too. We wore a lot of their clothes. Whilst I very much miss McQueen being around, I think the brand has held up. They still do some beautiful pieces. Most recently I think we’ve probably worn more Saint Laurent than anything else. I’ve actually never met [Hedi Slimane], which seems strange because we usually do cross paths with most of the designers, but I’m a big fan. I think he’s really got the right balance between punk and couture. It’s like punk couture—fabulous.

This interview has been edited and condensed.