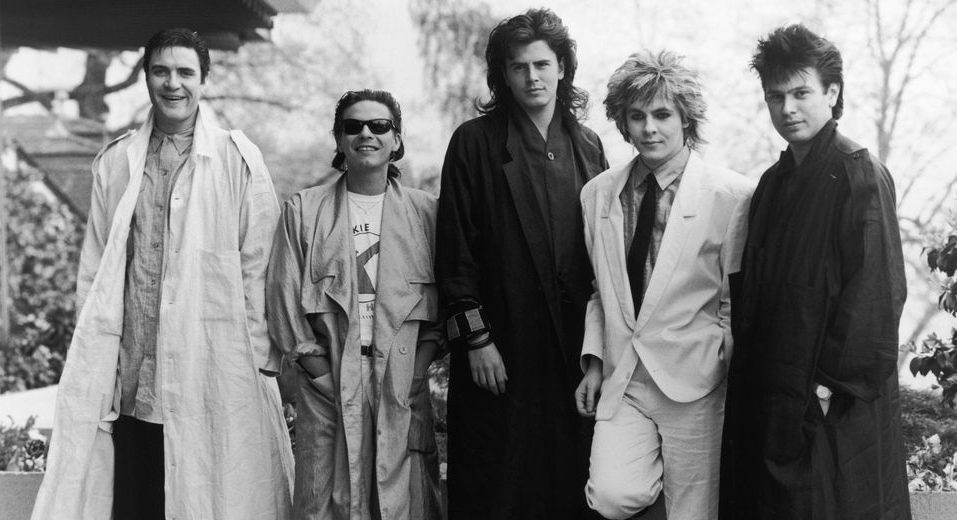 In We’re No. 1, The A.V. Club examines an album or single that went to No. 1 on the charts to get to the heart of what it means to be popular in pop music, and how that has changed over the years. In this installment, we cover Duran Duran’s “A View To A Kill,” which spent two weeks at No. 1 on the Billboard Hot 100 beginning July 13, 1985.

By 1985, Duran Duran were jetsetting global superstars, MTV darlings, and popular enough to have sold out two nights at Madison Square Garden the previous year. On the charts, things were also going well: The band hit No. 1 in the U.S. and the U.K. with 1984’s “The Reflex,” while their most recent single, “The Wild Boys,” had peaked at No. 2 in both countries. Internally, however, the band was fracturing: Inflated egos and chemically enhanced debauchery were causing issues, and fatigue had set in from their whirlwind rise to fame. In fact, the members of Duran Duran had decided to explore divergent musical interests, in two separate groups. Bassist John Taylor and guitarist Andy Taylor paired off in the funk-inspired The Power Station, while vocalist Simon Le Bon, keyboardist Nick Rhodes, and drummer Roger Taylor teamed up in the sleek synthpop group Arcadia.

What kept the five members of Duran Duran united—at least for a little while longer—was James Bond: The quintet provided the titular theme song to 1985’s A View To A Kill, the 14th movie in the Bond franchise, which starred Roger Moore, Grace Jones, and Christopher Walken. For the band, doing the song was a dream come true. In a 1985 Good Morning America appearance to promote the tune, Bond fanatic John Taylor called himself a “total maniac, bit of a trivia freak” where Bond was concerned, and recalled seeing a formative double bill of From Russia With Love and Goldfinger on his fifth birthday. During that same GMA appearance, Le Bon noted he saw Thunderball on his sixth birthday with a group of friends.

The band’s involvement with A View To A Kill’s theme was instigated by John Taylor—or, more specifically, Taylor’s inebriated bravado. By his recollection, he was drunk at a party thrown to celebrate the end of Wimbledon (hosted by Michael Caine, no less), and spotted Cubby Broccoli, who had produced several seminal Bond films. Taylor’s then-girlfriend, Janine Andrews, who had appeared in 1983’s Octopussy, introduced the two men. Taylor jumped at the chance to brazenly volunteer Duran Duran to record a Bond theme.

“I said, ‘When are you going to have a decent theme song again?’” John Taylor wrote in his memoir, In The Pleasure Groove: Love, Death, And Duran Duran. “He said, ‘Well, do you want to write the next one?’” The answer was a resounding yes. Taylor met up with Broccoli the next day and spoke with Bond composer John Barry via phone, who agreed to the pairing, albeit perhaps reluctantly. “John didn’t sound particularly overjoyed,” Taylor wrote, “but Cubby was firm about it. ‘I want you to make this work, John.’”

When the band gathered with Barry in November 1984 to start work on the song, things didn’t come together quite so easily. In his memoir, Wild Boy: My Life In Duran Duran, former guitarist Andy Taylor recalls that he and John Taylor “were both heavily into booze ourselves at the time” and corrupted Barry by “heavily leading him astray with more drink. There was a great little pub just down the mews street from where [the composer] was based, and we would all disappear there for long afternoons.”

Things weren’t so collegial between Barry and keyboardist Nick Rhodes: The pair clashed, often contentiously, because “they were both stubborn and had very specific visions of how things should get done,” John Taylor wrote in his memoir. Andy Taylor elaborated on the friction in Wild Boy, describing that Rhodes especially bristled when Barry confronted him about musical matters: “‘I’m fucking not doing that,’ Nick would say flatly. ‘You can say all you want, but I know what I am talking about and at this time, you don’t,’ said Barry in his posh voice. ‘I’ve worked with people like Shirley Bassey and Roger Moore, and this is my gig, young man.’”

The tension between the genteel Bond musical tradition and Duran Duran’s modern, youthful sound proved to be creatively fruitful, however. Le Bon’s vocal delivery was mysterious and cinematic, crucial elements for a Bond theme. His performance was also urgent and desperate, a welcome change from the tepid, adult contemporary schmaltz of the previous Bond theme, Rita Coolidge’s “All Time High.” Moreover, Rhodes’ keyboard parts ended up being the most prominent, magnetic aspects of “A View To A Kill”: Dense synth programming zigs and zags high in the song’s mix, while ice-pick-sharp keyboard stabs and futuristic stutters add dramatic flair. Barry was all in for such inventiveness, as drummer Roger Taylor wrote on Duran Duran’s website earlier this year, in a post reminiscing about the song: “I remember him mostly for his beautiful ’70s-style velvet jacket he wore while sitting at the piano trying to work the most outrageous chords into the song, whilst speaking with his lovely northern lilt. It all somehow juxtaposed with what we were doing and actually worked.”

By John Taylor’s estimation, what also eventually kept sessions running smoothly was the song’s producer, Chic’s Bernard Edwards. “Bernard was a firm hand at the tiller, which we needed because the weather was rough,” he quipped in In The Pleasure Groove. That rigor extended to how Edwards pushed Duran Duran’s rhythm section during the recording process. Both Taylors were huge fans of Edwards, and felt pressure to come up with grooves and rhythms that would impress him. Roger Taylor noted he used the beat from the Rolling Stones’ “Honky Tonk Woman” to kickstart their creativity.

In a footnote that’s always mystified fans, however, there wasn’t a commercially released 12-inch remix of the song. This was certainly odd for the time—and it was especially out of character for Duran Duran, who were known for their transformative remixes. In a 2014 response in the band’s “Ask Katy” question-and-answer section, John Taylor admitted that he was responsible for the lack of an extended re-do. “I wanted to keep a certain purity to the three-minutes-plus of [the song]. Some of the recent remixes had been rubbing me the wrong way. I was adamant about it—that there should be no ‘extended versions’ or remixes. It was shortsighted of me, I have since regretted it.” Late last year, however, a seven-minute version of “A View To A Kill” surfaced and was certified authentic by co-remixer Stephen Thompson, who noted the re-do was completed with every member of Duran Duran but John Taylor.

Still, the bassist’s stubbornness and commitment to quality actually served “A View To A Kill” well. “We had an approach we wanted to take, in the way we did the music for it,” John Taylor said on Good Morning America. “Which was our style. We really didn’t give any thought to what had come before us. We wanted to give it something very contemporary and very Duran Duran. We didn’t really think about what we had to follow. If we had thought about the acts we had to follow, we’d have never been able to do it.”

This tabula rasa approach was a good move: “A View To A Kill” hit No. 1 several months after it was released, and became the first (and still only) Bond theme to hit the top of the U.S. singles charts. Its success proved that shaking up the Bond musical formula wasn’t necessarily something to fear; in fact, attempting to reach a new, younger generation of music fans might be beneficial for the movie franchise as well. Perhaps that’s why the next Bond film, 1987’s The Living Daylights, attempted to replicate the vibe (and, ostensibly, success) of “A View To A Kill”: The theme was performed by a-ha, another youth-oriented band huge in the U.K. and Europe, and stylistically wasn’t a far cry from Duran Duran’s cryptic synthpop. Although “The Living Daylights” theme was a commercial flop in the U.S. (it fared far better in Europe), subsequent Bond themes made a more concerted effort to put a contemporary spin on Bond’s retro vibe, culminating in Sam Smith’s current Spectre title theme, “Writing’s On The Wall.”

In hindsight, “A View To A Kill” represented the first tentative steps the Bond movie franchise took to update its approach and aesthetic. As the next Bond entry, The Living Daylights might actually be the true pivot point: It featured a new Bond, Timothy Dalton, and was the last film to feature scoring from John Barry. However, “A View To A Kill” also proved to be a turning point for Duran Duran. By the time the band played the song at Live Aid in summer 1985, they were even more frayed. That performance was the last time all five members performed together until 2003: Duran Duran emerged in 1986 with Notorious without guitarist Andy Taylor and drummer Roger Taylor, who had both departed from the group.

Despite being recorded and released amid such turmoil, “A View To A Kill” remains a staple of the band’s concert set lists in its current lineup, which includes Le Bon, Rhodes, and Roger and John Taylor. Musically, the song is still a jolt of innovation, while its lyrics convey shadowy intrigue and hint at dangerous romantic dalliances, two things intrinsic to Duran Duran’s appeal. More important, there’s enough enigmatic drama built in to keep the tune fresh. “Bond songs have to be big songs, don’t they?” John Taylor told The A.V. Club in 2012. “They have to have the grandiosity. It’s like designing a Rolls-Royce. You want it to be completely state of the art, but it’s always going to have the honking great radiator grill on the front. There’s certain criteria that have to be fulfilled. But I think we nailed it with that song. We really did nail it.”