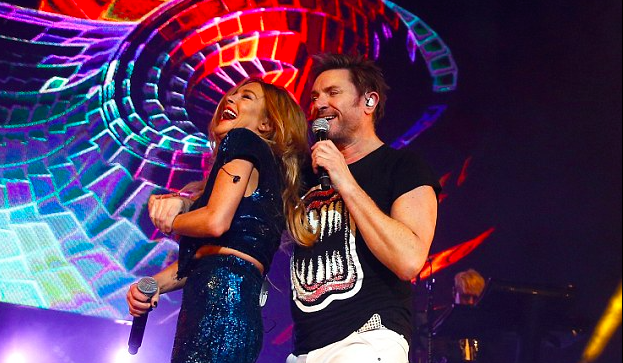 For what Simon Le Bon described as an “ancient” band, Duran Duran’s reach stretches far in 2015.

Their special guests this evening were Mr Hudson, a sometime Kanye West collaborator and a key contributor to their new album, and actress Lindsay Lohan, who offered a brief spoken word interlude during Danceophobia and left in a shimmer of blue sequins. Others on the broad cast list of Paper Gods include Mark Ronson, Nile Rodgers and Janelle Monáe.

Le Bon also dedicated old favourite Save a Prayer to the victims of the Paris shootings. It was recently covered by Eagles of Death Metal, the band that played that night. Its new resonance was another indication that this is not a band content simply to stroll along on the nostalgia circuit.

Le Bon and louche bassist John Taylor maintained impressive energy levels, while Nick Rhodes played the classically enigmatic keyboard wizard at the back. These fiftysomethings weren’t quite suited to the youthful EDM of new songs such as Last Night in the City but the joyful funk of Pressure Off came close to old glories.

An impeccably paced set raced towards Rio at the close, an obvious final destination, although these blasts from the past have every reason to be looking to the future.