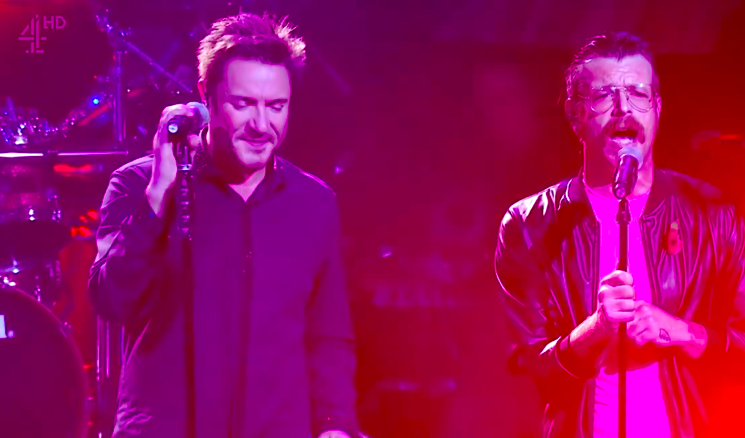 Back in the UK rehearsing for their upcoming tour, Duran Duran issued a statement today regarding the fan campaign to propel the Eagles of Death Metal’s cover of their song "Save A Prayer" to #1 on the British charts.

"We are honored that the Eagles of Death Metal covered "Save A Prayer," and included it on their most recent album. In fact, it was a thrill playing the song together recently on TFI Friday in London. We bumped into the band on Friday afternoon of last week, when we were all on our way to Paris on the Eurostar. We were opening Al Gore’s Climate Change concert broadcast there, and they were playing at the Bataclan. What happened that night defies any kind of comprehension. The tragedy that unfolded at their show, and around the city, brought immeasurable sadness to so many and shocked the world. We wholeheartedly support the campaign that the fans have mounted to show solidarity to the band that they love. We will be donating all of our royalties from the sale of this version of the single. There are a number of causes under consideration, all of which are peaceful, effective and unifying."

Previous Article
Multi-Platinum Artist Seal Added as Special Guest on Duran Duran UK Arena Tour
Next Article
The Return of Duran Duran: ‘We Believe in this Brand Much as we ever Have’
News
Back to all news