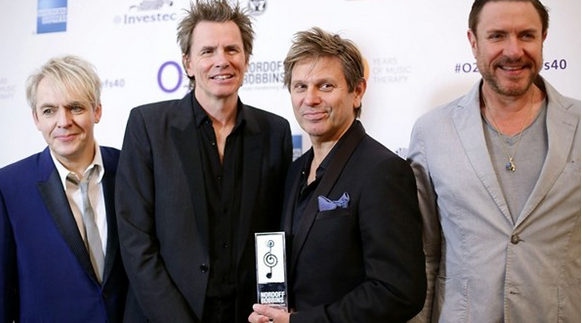 Duran Duran praised music streaming sites as “the way forward” as they picked up a lifetime achievement award at the O2 Silver Clef Awards.

While the pop-rock group – Simon Le Bon, Nick Rhodes, John Taylor and Roger Taylor – approved of services such as Spotify, Tidal and Apple Music, they said streaming sites need to “sort out proper deals” for artists.

Apple Music recently did a U-turn, after Bad Blood singer Taylor Swift hit out at them for their initial decision to not pay artists during a trial period of their new streaming service.

Keyboardist Nick said: “I think music streaming is the way forward for the future. There are a lot of great sites that provide an amazing service to the public, and it’s brilliant that music can be accessed like that. They need to sort out the deals properly for all artists and then we’ll all be happy.”

The foursome were honoured with the Spotify Lifetime Achievement award at the ceremony, which was hosted by music therapy charity Nordoff Robbins and took place at Grosvenor House hotel in London’s Park Lane.

“We got some lifetime achievement awards about a decade ago, and we thought, ‘Are they trying to tell us something?’ So we’re very happy we got another one 10 years later,” Nick said.

“We’re very happy to be here. Nordoff Robbins does some amazing work and we’re very proud to be receiving this today.”