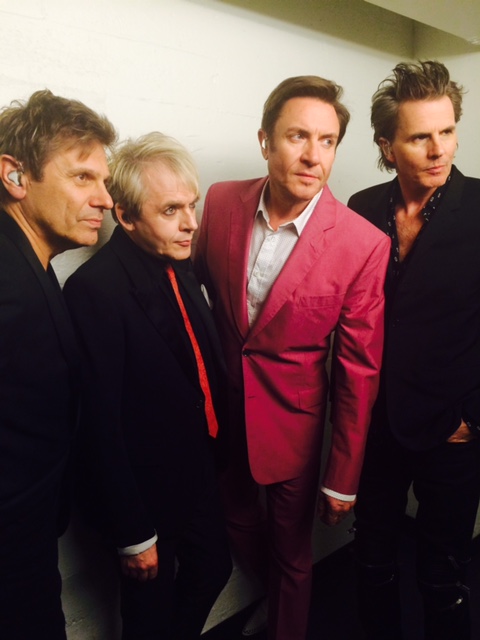 Director David Lynch hasn't made a feature film since 2006's Inland Empire, but in the interim his legacy has only grown. Recording albums, appearing on Louie and shooting a concert film with Duran Duran, the 69-year-old Oscar nominee has managed the nifty trick of remaining visible while simultaneously maintaining an enigmatic, cryptic air.

Part tribute concert, part fundraiser, part transcendental meditation infomercial, "The Music of David Lynch" was indeed a deeply Lynch-ian experience, a one-night-only event in which musicians spanning different generations and genres gathered at the Theatre at Ace Hotel in downtown Los Angeles to play songs from and inspired by the director's movies and albums. Raising money for meditation non-profit the David Lynch Foundation, the occasion will surely be the only time Donovan, Duran Duran and the Flaming Lips come together under one roof. Speaking before the show, the Lips' Wayne Coyne confessed, "We're not worthy, but we're here."

And yet, the man of the hour, as seems to be his wont, stayed out of the spotlight. Posing for a few photos on the red carpet before quickly walking past shouting reporters, Lynch turned behind him to announce, "We're going to hear some music," and then vanished.

Before the music, though, the sold-out crowd of approximately 1,600 heard about Transcendental Meditation. The show opened with a promotional video featuring prisoners, vets and celebrities such as Jerry Seinfeld and Paul McCartney explaining how such restful contemplation can improve one's worldview and harness untapped potential. The video's sincere, inspirational tone flipped the temperament of Lynch's movies, which have a wizardly ability to capture the banality of life and then tweak it just slightly so that ordinary reality suddenly feels funny, unsettling, dangerous.

Nevertheless, Lynch's message had its converts among the performers. Sky Ferreira, who sang a smoky, fragile version of "Blue Velvet" — a song that Lynch made iconic by including it in the 1986 movie of the same name — said before the concert that Transcendental Meditation radically helped her. "I started [meditating] last year," she said. "I had severe stage fright. I don't sleep very well. My mind is constantly racing. Once I learned how to do it, suddenly it set everything in place."

Still, even TM couldn't completely calm her nerves this evening. "I'm very excited," she told Rolling Stone. "I'm very lucky that I got to do it. But it's a little nerve-wracking." She laughed and then added sarcastically, "I mean, it's only in front of David Lynch, whatever."

"The Music of David Lynch" found its footing once it turned the festivities over to the performers, their clear love of Lynch and the music's deep wells of emotion and sensuousness. Taking the stage of this refurbished 1920s movie palace, the artists were encased in the Theatre's gloriously ornate design, the red-blue-and-purple-colored lighting making the crowd and entertainers feel entombed in a gorgeous, moonlight-flecked cave. The space felt otherworldly, much like the disorienting beauty of one of Lynch's movies.

With Lynch only taking the stage at the end briefly to offer a few thanks, the night belonged to the director's diverse group of surrogates and acolytes. Some of the night's biggest cheers greeted his longtime composer Angelo Badalamenti, who kicked off the evening with a performance of the ghostly "Laura Palmer's Theme," those frosty keyboard swells inseparable from the enveloping eeriness that was a hallmark of Twin Peaks.

However, chanteuses and ingénues dominated the evening's first half, a variety of female singers embodying the lush allure of Lynch's soundscapes. The bluesy confidence of Chrysta Bell, dressed in a seductive, slinky bodysuit, only intensified her rendition of "Swing With Me," a song from her 2011 album, This Train, which Lynch produced. When she ended her sultry, slow-burn love song with an emphatic "I wish this night would never end," it raised the bar for a show that consistently targeted the dark and the ethereal, the ineffable and the haunting.

But the night's first standing ovation went to Rebekah Del Rio, who became a cult figure after her stunning rendition of "Llorando" in Mulholland Drive. Effortlessly turning the venue into her own Club Silencio, Del Rio sang the song a cappella with the same aching purity as she brought to Lynch's 2001 film.
Rebekah Del Rio Rebekah Del Rio performs at "The Music of David Lynch."

The bill's heavy hitters came to the fore as the two-hour show wound to a close, not so much covering Lynch's musical highlights as flaunting their own star power and creative drives. Moby's "Laura Palmer's Theme"-biting "Go" provided the first opportunity for the crowd to get up and move, shaking the dreamy-lounge vibe that had reigned previously. Pounding away on conga drums when he wasn't dancing to and fro, Moby illustrated how subsequent generations have been inspired by Lynch to make their own art. After finishing "Go," he took a moment to tell Lynch, who was seated near the front, that while other musicians have been influenced by the filmmaker, "That last song I just stole."

The Flaming Lips' Wayne Coyne and Steven Drozd took the evening's most radical approach, playing a section of Eraserhead's instrumental score and marrying it to a bit of the music from Lynch's subsequent film, The Elephant Man. Coyne (on hands and knees at the edge of the stage) recited dialogue from the latter film's finale through a microphone that distorted his voice, making it sound inhuman and yet somehow more vulnerable. "It's a brutally beautiful, painful scene," Coyne had said on the red carpet about the Elephant Man ending. "But that's why we love David so much, 'cause it's always about the heart."

And then there was Duran Duran. Though no stranger than Lynch's decision to make a live film of the Eighties titans in 2011, the band's appearance as the night's closing act was both bizarre and oddly perfect. On an evening in which mood, mystery and foreboding ruled, Duran Duran, led by Simon Le Bon in a snappy salmon suit, were all showbiz gusto. Gliding through "The Chauffeur," "Ordinary World" and "Hungry Like the Wolf" with unshakeable swagger, the band got everybody out of their seat and singing along.

Le Bon told the crowd that when Duran Duran were art school kids, they were all in thrall to Eraserhead, and even if one buys that claim, their bright, bulletproof pop couldn't be further away from the dank, sardonic charm of Lynch's best movies. And yet, he's a filmmaker known for his surrealist impulses. On this night, there wasn't anything more hypnotically captivating than watching these four Brits stick out like a sore thumb but nonetheless absolutely burn the place down.