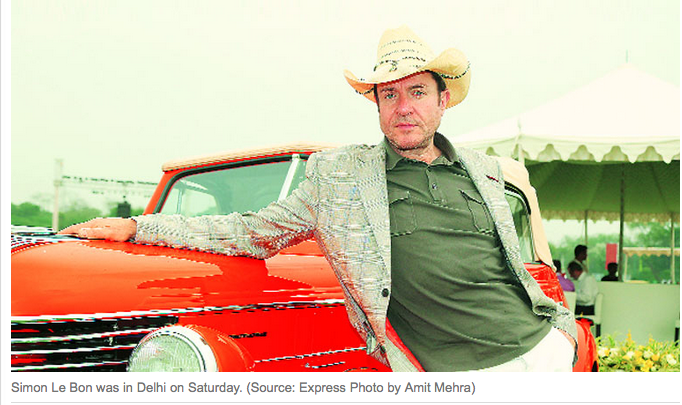 Upon first meeting Simon Le Bon, one can’t help asking him if the legend of the pink leopard-print pants is true. As the story goes, in 1980, a young Le Bon turned up for a rock band audition in a tight pair of the aforementioned pants and a notebook filled with poems. The band was, of course, Duran Duran, and with the addition of Le Bon, the Birmingham-based act would go on to influence the world music scene in the decade and beyond. “I got a call from an old girlfriend to come meet this band, which would play at the pub she worked in. I had my own punk band at that time. And yeah, I was wearing a pair of faded crimson leopard-print drainpipes, as we used to call them,” says the 57-year-old. He pauses, and adds, “I suppose they might have gotten a bit pink because of the wash.”

Le Bon had about 30 poems, while the band had tunes without lyrics. “They played a melody for me and I said, ‘hang on, I think I’ve got just the words for this’. So we sat and worked on it together and it turned out a be a song called 'Sound of Thunder,' and that was our first track,” he recalls.

The rise in Duran Duran’s popularity coincided with the introduction of MTV in Europe and the US. The band was among the first to capitalise on the advent of the music video, using professional 35mm movie cameras and employing trained music video directors. They also shot videos with storylines in dramatic backdrops, using stylised cinematography. Videos such as 'Girls on Film' and 'Hungry as a Wolf' are the stuff legends are made of, still cited by contemporary international artistes as influences. This, coupled with the entire band’s good looks, garnered them a huge following, specially among the teenage and young women demographics.

“We were extremely fortunate in how everything came together to make us so big. MTV was desperate for video content, and we had a great management team who recognised this gap in the market. We started playing to adult audiences in pubs and bars. Once we started playing concerts and got famous, naturally the girls happened,” he says, with a laugh.

Ironically, it was this particular fan-type that led to Duran Duran’s experimental punk sound being dismissed as pop rock by music critics. “We all can’t be Bob Dylan. The problem is that the British music press at that time was basically a bunch of blokes, and they took umbrage at our having such a huge female following. So they sort of wrote us off as pop rock. We were never really bothered by that perception, because we were making the music we wanted and had an audience for it. We’ve always tried to be a band of the masses,” says Le Bon, adding, “We had girls throwing knickers, roses and teddy bears at us on stage, so we weren’t exactly complaining.”

Le Bon, who was in Delhi on Saturday as a jurist for the fourth edition of Cartier Travel With Style Concours D’Elegance, says Duran Duran has a “huge ambition” to come play in India, provided they find a sponsor. “The way you can do a tour is either play small, exclusive gigs to a niche audience, or massive gigs for large audiences. We’ve always preferred the latter. Ideally, these concerts should be free, but the production costs are massive and that’s why you need a sponsor,” he adds.