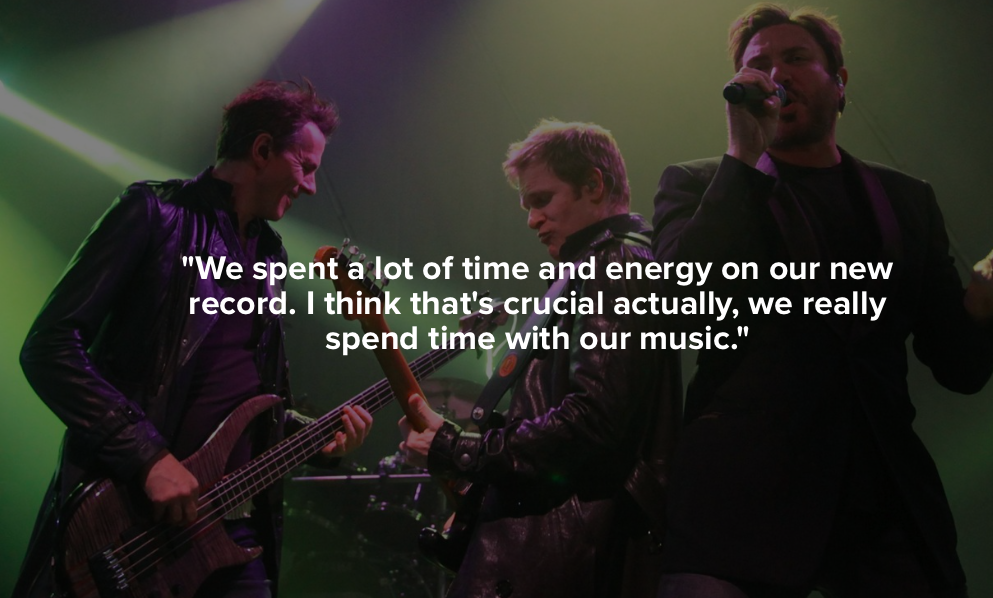 When you see Simon Le Bon on stage, you often wonder if the man ever ages.

Despite having their roots and success thirty years ago, the frontman of Duran Duran somehow manages to stay young.

Perhaps it's the company the band keeps.

Whether headlining arguably the best major festival in the UK in Bestival, or teaming up with producers such as Mr Hudson, Duran Duran have worked harder than most bands to keep themselves fresh when it would be easier to simply tour their substantial greatest hits.

Ahead of their show at the Genting Arena on December 4, we spoke to Duran Duran about the possibility of recording with UB40, how they build their setlist and so much more.

Are the shows in Birmingham extra special?

You're only ever going to have one home, as a band, and for us it’s Birmingham.

Who would you most like to work with from the area but haven’t had chance?

Inevitably there’s UB40. Would you consider Led Zeppelin? I’d love to do something with Robert Plant, although it may never happen.

We’re open to stuff like that and we’re not regionalist either, we’re not tied to the origin of artists.

Mr Hudson (features heavily on Paper Gods) is a Birmingham lad. When he first got in touch, that was his attempt to sell himself.

You've released a lot of music in your career. Do you still feel just as creative at this point?

I guess we've been through periods where we've actually felt less creative, that’s for sure, yeah. I think the last year has been the most creative of our career. The amount of stuff that we've come up with and the quality of it I think is really good.

Would you consider Led Zeppelin? I'd love to do something with Robert Plant

How were the festival shows over the summer?

The festivals have been great.

The big one we played here was Bestival down on the Isle of Wight and it was an absolute storm, it was wonderful and a complete success.

We're quite new to the whole music festival scene really. When we started in the eighties, festivals weren't our kind of thing at all. We were quite late getting turned on for them.

It feels really good doing them and it’s great to have the opportunity to play to other people’s audience.

Are you looking forward to moving on to the arena shows?

We've been on tour in the states now and had some really great evenings. We played at Red Rocks and we played at the Hollywood Bowl and they were two really notable evenings.

We’re in a very good mode now as far as performance is concerned.

We’re just about to up the production so we’re going to come back at do production rehearsals until the beginning of our UK tour.

What can you tell us about the production?

It’s song driven. We've never been a big effect kind of band. We've never had the flying pigs and things like that. There will be a set and we’ll have spent a lot of time and effort putting together video footage to project behind the band.

What made you wish to work with so many different people when making Paper Gods?

We really just started of making the album on our own.

We've been asked before if we would do collaborations, mainly by management and record companies. I, myself, have been very resistant to it and jealously held onto the microphone not wanting to let it go.

This started when John Frusciante (ex Red Hot Chili Peppers guitarist) got in touch with us and said he’d always wanted to play on a Duran Duran album. So we said 'yes please’ and sent the tracks over to him in California.

He finished one and we said ‘okay have another’ and he did that and we did four. That really made me reconsider my attitude towards having guests on. If it brings so much to the band in terms of the guitar, what would it be like to have different singers on the album?

That’s when Ben Hudson joined the outfit. He was instrumental in terms of bringing people in. He’s a major collaboration on production, songwriting and performance.

How was it working with Lindsay Lohan on the album?

She’s a performer. She knew exactly what to do. We had written the part. It was just a question of getting her down to the studio, which we did.

We got her in the vocal booth and she nailed it in three takes. It was very easy.

Why do you think you’re still popular after this length of time?

You’re kind of asking the wrong person, you should be asking who we’re popular with. I would imagine it’s because we’re one of the last remaining bands from the eighties.

We’re not playing a retro roll and having a nostalgia trip. We spent a lot of time and energy on our new record. I think that’s crucial actually, we really spend time with our music.

We put a lot of passion into making the best album we could. There’s a hunger for good music out there with a lot of formulaic stuff in the charts.

What are the future plans of Duran Duran?

I think one of the great things about music is it keeps you absolutely in the moment. You're either on stage performing or you’re in the studio writing and performing.

I think we just go on as long as it feels good.

I don’t know what we’re going to feel like in two or three years time when we go back to the studio.

It may be we decide we can’t go through it again or maybe we’ll be hungry in the same way that we were when we started this one. We get on with each other and have a laugh. I wouldn't swap my job with anybody.

Why do you get on so well after all this time, when so many others have split?

We didn't just let go of the relationship. Any relationship is down to how much effort you put into it. With the music, we invest in it.

There’s respect, because I listen to what those guys do.

We've got a loyal nature and we did have a competitive edge but that was very early on in the bands' career in the first incarnation.

We managed to get over it and value each other as friends.

How do you build a setlist when you’ve got such a huge back catalogue?

It is one of the great questions. There’s a few basics, one of them is two thirds old material and one third new material. Roughly, that’s about the right ratio we think.

You've got to decide whether you want people dancing or sat down listening to the deeper and more esoteric stuff.

We tend to want to keep people up and on their feet. I love being a party band. Keeping the energy high is an important factor for us.

You've got a lot of older hits that people come along to hear. Do you ever get bored playing them?

The operative word in your question is hits. I think if you had one hit that would be the albatross around your neck then you’d feel very differently about it.

We've had so many top 10 and top 5 records that we shuffle them around and give them a rest.

There’s nothing we feel that we have to play, not even Rio, which may be in many people’s minds the seminal Duran Duran track.

Do you have any strong opinions on current pop music?

I do follow modern music but I don’t think it’s pop music.

The genres have become more blurred.

There are some fantastic artists out there. Let me just name three who I think are really hot: Tame Impala, FKA Twigs and Charlie XCX.

All different but all good in their own field.

If Duran Duran were from this decade, would you achieve the same success?

It’s such a hard question. If you go on personality, drive and ambition alone. And maybe confidence and front. I think then yes because we’d have those attributes but probably be making a different kind of music and taking a different route.

I think the raw materials are there in the personalities.