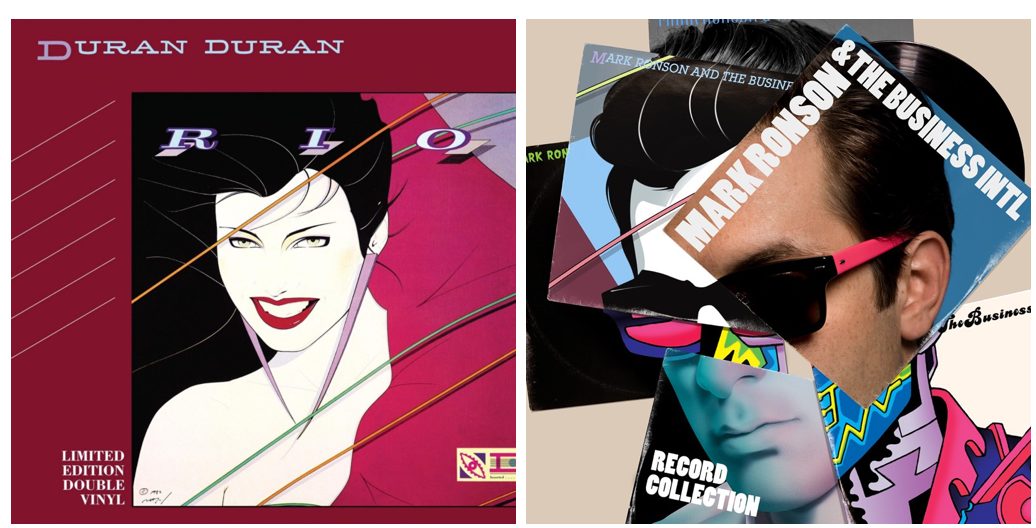 Cuepoint: Duran Duran obviously had some influence on you growing up, as there is a glimpse of the Rio album cover on the artwork for your 2010 LP, Record Collection. Can you talk about that?

Mark Ronson: I think they are certainly the first favorite band I remember. I remember really being into music, but you kind of really remember your favorite band. But you don’t understand when you are 9 years old, all of the things that go into making you love that band. But now I kind of understand. They had that rhythm section; they kind of wanted to be Chic. They wanted to be like a disco band. You had the guitar player thinking that he was in the Sex Pistols, and then you had this amazing keyboard — early sequencing of all this stuff that came from Kraftwerk — and all this stuff that eventually became hip-hop and dance music. And then Simon LeBon with an iconic, great voice. So now I kind of look back, “Oh cool, because I love funk, I love guitars, I love synths.” So it’s quite obvious why I love that band.

They wrote incredible songs and its obviously one of the few things from that era that stood the test of time. They still sell out each show. Even when they did “Notorious,” more on the funk side. They’re legit, they are a great band. They definitely had an unquantifiable influence on me to my musical evolution.

You produced Duran Duran’s last album, All You Need Is Now. Was that a dream-come-true kind of thing, or more of a natural progression in your career as a producer?

It’s always a bit of a double-edged sword and a somewhat of a crap shoot working with your idols. Just because somebody made something you like 20–25 years ago, doesn’t mean necessarily they are still great. Or maybe they are still great, but the idea of you hooking up with them might not yield anything amazing. It just started like, “Well, let’s get in and do a couple of songs and see what happens.” I think it’s the combination of being a good producer — for the sake of argument — and being such a super fan of theirs. Sort of almost knowing what fans of Duran Duran want to hear, which a lot of people thought was a strong return to form for them. I definitely earned a good 25,000 Twitter followers that seem to go to bat for me for what I’ve done for them, which is a nice feeling.

You joined Duran Duran on stage to play at the 2011 David Lynch directed Unstaged performance in Los Angeles, which hits theaters tonight. What can you tell us about that night?

Obviously, it goes without saying that David Lynch is one of the most legendary film directors. And also how mysterious and how little you know about him goes into it. Like, “Oh my god, is he going to be this pretentious, aloof, avant garde asshole?” To be honest, I wasn’t really thinking any of those things, I was just like “Holy shit, I can’t believe I am going to meet David Lynch!” Even if I just shake his hand for a second, that’s quite an exciting thing. He was just so incredibly personal, and had this incredible, lovely aura. That was great, and then obviously getting to be on stage with those guys and be a part of something like this was another one of those surreal life experiences that I couldn’t believe was happening.

I understand that recently you have been working on Duran Duran’s next album. What can you tell us about the sound of the new record?

I don’t know how much they want known about it, so it’s not really my place to say. I think it has been made public — or it least it got out — that Nile Rodgers and them are working together again. It’s the first time they’ve worked with Nile since “Notorious,” so it goes without saying that they have some kind of fucking magic chemistry. That’s all I feel like I should be saying, but maybe they’ll say more.

And what else are you working on personally that you can speak about?

I’ve just finished my new [solo] record. I am scoring this new Johnny Depp / Ewan McGregor film called Mortdecai, which has been really exciting. It’s the first movie I have scored and some of my favorite records of all time have been film soundtracks, so that’s been really exciting as well.

I’ve been working with Action Bronson, Vic Mensa, and Chance The Rapper. There’s this whole new wave of young rap talent that I find invigorating, so there’s that.