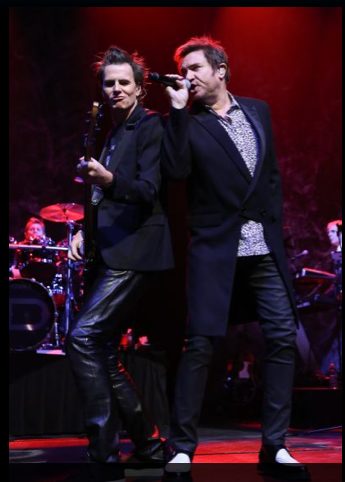 On the eve of the Circuit of the Americas (COTA) Grand Prix race in Austin Sunday, legendary '80s rockers, Duran Duran performed an exclusive set at ACL Live at the Moody Theater for race fans. The VIP-style event featured open bars, cocktail tables and buffets of food offerings. The two-time Grammy winners ran through a hit-filled 90-minute set while shrieking female fans voiced their excitement at seeing the Englishmen in the flesh.

While the band rests largely on the laurels of their first five albums (all released in the '80s), Duran Duran have admirably continued to record new albums releasing their 13th studio album, All You Need is Now in 2011 when they could have easily slid into being a retro-act like so many other aging bands. Also laudable was the absence of backing tracks which the synth-heavy act could have easily employed without complaint from their rabid fanbase. Instead, with core members Nick Rhodes, John Taylor, Roger Taylor and Simon LeBon along with touring guitarist, now full-time member, Dom Brown the band has soldiered on, proudly making music the way they did when they began more than 30 years ago.

As the venue lights dimmed, strains of an orchestral introduction of Duran Duran's famous James Bond theme song, "A View to A Kill" could be heard over the PA. One by one the band took their places and played the song which won them Best Original Song at the 1986 Golden Globe Awards. We were a bit surprised (and pleased) Le Bon's vocals sounded nearly identical to the recordings given the time that has passed since the band broke through with the single, "Girls on Film" and the accompanying racy video that aired on MTV.

Behind Le Bon, the band played beautifully. Duran Duran in a live setting allows the audience to see how well Rhodes plays keyboards and produces the heavy synth sound that is the group's hallmark. Brown was no slouch either, peeling off a few tremendous guitar solos that impressed the crowd. A guest sax player added an element of sophistication to the arrangements on several tracks.

Hit "Hungry Like A Wolf" followed the opening song to much excitement. The band segued to "The Reflex" which allowed Rhodes to show off his skills on the keys. Rhodes was one of Duran Duran's founding members and often a catalyst of creativity for a band that was frequently dismissed as pop (which they are) by their contemporaries. No one knew the group would outlast most of those critics.

Older fans got to wax nostalgic when the group hauled out ballad, "Save A Prayer" later in the set list. Perhaps the most bizarre part of the performance was a decidedly odd version of Grandmaster Flash and Melle Mel '80s dance hit, "White Lines (Don't Do It)." Hearing the proper Englishman Le Bon sing the rap portion of the song was surreal. The cover was not without precedent. Duran Duran famously reworked the song in 1995 and made an accompanying video that aired on MTV.

The set ended the show with another hit, "Wild Boys" then the band left the stage and quickly came back for an encore with a "Girls on Film / Psycho K mashup then concluded the performance with band intros and their most popular single, "Rio" with the audience loudly singing along.

If you have not had a look yet, be sure to browse the amazing images our photographer, Suzanne Cordeiro captured of the show. Our favorite is a shot of 56-year-old Simon Le Bon getting air in his vintage black and white creeper soled shoes.

A View to a Kill
Hungry Like The Wolf
The Reflex
Notorious
Come Undone
Union of the Snake
All You Need Is Now
Is There Something I Should Know?
Save a Prayer
Girl Panic!
Careless Memories
Ordinary World
White Lines (Don't Don't Do It)
(Reach Up for the) Sunrise
The Wild Boys