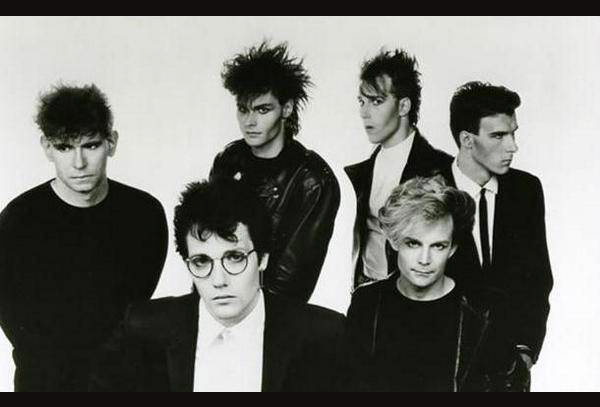 So you're in a band in Canada. You start to build up some local success. You score a single everyone is interested in. And then Duran Duran circa 1984 come to play in Canada and your band is asked to open for them. AMAZING, right? In one of our coolest Q&As to date, Joe Vizvary from the band Images in Vogue, themselves part of the 80s music story, tells us all about his experiences in the band and being asked to open for Duran Duran in the middle of the mayhem!

1. This could be the coolest Q&A we have ever done! First of all, tell us a little bit about yourself...

Well, here's a recent article about me. You can read it here.

2. How did you guys come up with the name?

The “In Vogue” comes from a song of that name by Japan on their Quiet Life album. The “Images” is what we see around us in the modern world, always changing, always new.

The original line-up was Gary Smith on bass synthesizer and bass guitar, Don Gordon on synthesizer and guitar, Joe Vizvary (me) on synthesizers and piano, Kevin Crompton on drums and electronic percussion, and Gary Johnson on vocals. Dale Martindale replaced Gary J as vocalist in December of 1981. Glen Nelson joined in August 1982 as another synthesizer player. This was the line-up that opened for Duran Duran in 1984.

4. Most. Important. Question: how on earth did you get the opening gig spot with Duran Duran in 1984?

Our connection with Duran Duran goes back a few years before the 1984 tour. Duran Duran performed in Vancouver at the Commodore Ballroom on the Rio tour July 21, 1982. Glen Nelson had recently left his band “e” and was performing as a solo artist. The manager of “e”, Gerry Barad, also worked for Perryscope, the promoters of the Duran Duran show. He got Glen the opening slot for the Duran Duran show. Gary did lights and I did sound for Glen. All three of us got to meet the band, as well as their crew, and struck up a relationship. Duran Duran spent a few days in Vancouver and we hung out at the Luv-a-Fair, a local club, as well as go to some parties with them.

By the time of the 1984 tour, IIV had released our hit, "Lust For Love," and were quite well known in Canada after opening for Bryan Adams on his Cuts Like A Knife tour. Gerry Barad suggested IIV as an opener for Duran Duran’s tour and, partly because of our previous connection, we were chosen to open in Calgary and Vancouver. After the first night, we were asked to continue on the tour to Seattle. After the Seattle show we were asked to continue to Reno and the rest of the tour. Unfortunately, US Customs wouldn’t extend our work visas and we had to leave the US to re-apply. They turned us down and we weren’t allowed back into the US to finish the tour.

5. Did you get to hang out with the band again or was it just too crazy an atmosphere? If so, what was your impression?

On the 1984 tour things were pretty hectic and travel schedules were tight, so we only had time to say hi here and there. They were nice guys, especially Roger and Nick. We talked to Nick quite a bit, especially about the band Roxy Music (Bryan Ferry), for whom we had opened in 1983.

6. What was it like being in the thick of “durandemonium” at that time???

The change from 1982 to 1984 was unbelievable. In 1982, there were a few fans hanging around outside the Commodore Ballroom, and the fans were pretty wild at the show, but in 1984 it was like Beatlemania. There was screaming all the way through every song. Thousands of fans were waiting outside and swarmed every vehicle that came to or went from the venues.

More on IMAGES IN VOGUE:

Previous Article
The Making of Band Aid: Secrets and Stories From the Star-Studded Session
Next Article
“Kingdom” Charli XCX Feat. Simon Le Bon: Reviews
News
Back to all news