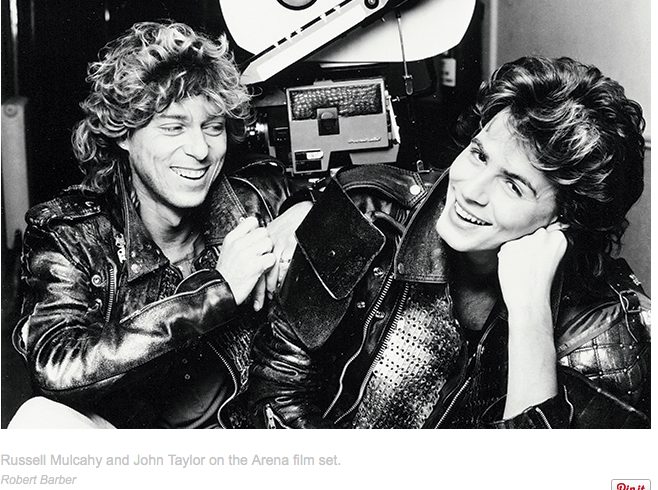 Russell Mulcahy is the man behind an endless string of iconic music videos, dating back to the first that aired on MTV in 1981: The Buggles' "Video Killed the Radio Star." From Duran Duran sailing on a yacht in "Rio," to Bonnie Tyler’s bizarro "Total Eclipse of the Heart," the director's clips, more than 80 in all, dominated MTV in the '80s.

Mulcahy, who fondly refers to his early video-making career as a "frustrated feature film maker," directed nearly all of Duran Duran’s early '80s videos. "It was my film school. It was my way of making little mini-features. In a selfish way I was doing it for my own pleasure." Between the very late 1970s and 1984, Mulcahy directed dozens of clips, including ones for superstars like Elton John, Fleetwood Mac, Rod Stewart, The Rolling Stones, and Billy Joel.

In 1984, Mulcahy shot two of his most ambitious and epic videos for Duran Duran's "The Reflex" and "The Wild Boys."

"We were tremendously lucky to meet him when we did," says Duran Duran bassist John Taylor. "He was a pioneer in this medium. We had no sense that videos were important, or would be significant for us."

The band, dubbed "the Fab Five" in 1984, scored its first Billboard Hot 100 No. 1 single with "The Reflex" on June 23, and a No. 2 single with "The Wild Boys" on Dec. 15. Keyboardist Nick Rhodes remembers the band was “astonished by how we had managed to reach that point in a six-year period.”

Mulcahy's focus later shifted to features -- he directed the cult classic Highlander and the Emmy-nominated Prayers for Bobby -- but he has come full circle as an executive producer and director of MTV's Teen Wolf series. "We push the boundaries in every direction, as far as we can go," says Mulcahy of the new gig. "It's what we did in the early days of video as well."