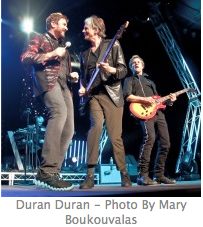 Fashion Rocks Locks In Duran Duran For Only 2014 Performance

Duran Duran will perform for the one and only time at Fashion Rocks in Brooklyn on September 9.

Fashion Rocks will be a two-hour celebration of fashion and music.

“Fashion Rocks is the only show that celebrates the inextricable link between fashion and music, a relationship that is more relevant today than ever before,” said Richard Beckman, CEO of Three Lions Entertainment. “For the first time we’ll air the event live during Fashion Week from Barclays Center. It will be a spectacular affair, featuring some of the world’s most talented musicians as well as today’s hottest fashions.”

Fashion Rocks will be hosted by Ryan Seacrest and produced by Don Mischer Productions.

Tickets go on sale on August 1 at 10am ET through ticketmaster.com