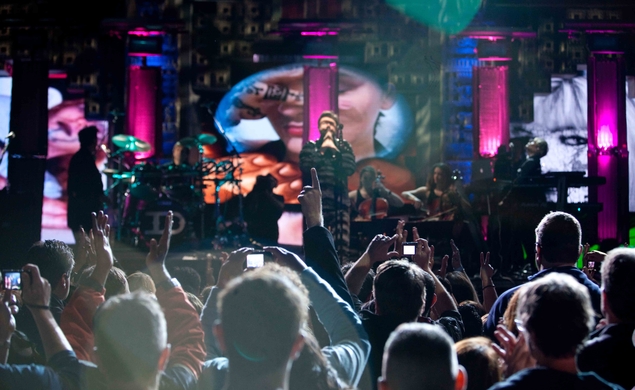 Los Angeles, CA – August 13, 2014 – The iconic British rock band Duran Duran will take over US movie theaters on Wednesday, September 10th for a one-night-only showing of the film Duran Duran: Unstaged. This movie showcases the band’s concert at the Mayan Theatre in Los Angeles, which was part of the American Express Unstaged concert series that celebrated the band’s All You Need Is Now album and world tour. Screenvision in alliance with Phase 4 Films will screen the film in over 300 locations.

The film was directed by award-winning filmmaker David Lynch (The Elephant Man, Blue Velvet, and Mulholland Drive) as part of the American Express Unstaged. Known for his unique cinematic style that masterfully blends extraordinary imagery and sound design, Lynch has captured the band’s performance in a ground-breaking, creative way that will provide fans with a visually stunning in-theater viewing experience. When it was originally filmed, the director layered images that he had created in advance of the show (live action, animation, special effects, etc.) on top of the band’s performance footage as it was being filmed live. The technique, created an ocular event unlike anything ever seen before. Special guests include Gerard Way (My Chemical Romance), Beth Ditto (Gossip), Kelis and long-time collaborator, Mark Ronson.

CLICK HERE to watch the newly-imagined trailer for the film, recently created by David Lynch. After the live performance, David Lynch went back into the studio to recreate the magic that occurred during the concert and re-cut the film - watching back the performance footage while he ‘live switched’ the show for a second time, reworking the overlay footage to create a new director’s cut. Duran Duran also remixed the audio for this upcoming theatrical release.

Tickets will go on sale on Friday, August 15th. CLICK HERE for purchase information. This will undoubtedly be a feast for the eyes and ears on the big screen that you won’t want to miss.

“We are all very proud to have worked in partnership with the legendary David Lynch on this project. It was a tremendously rewarding and exhilarating experience,” said Simon Le Bon. “I was particularly delighted by the sausage barbecue sequence during the song Come Undone - something I would never have expected but it works superbly!"

“David is a visionary artist, his work is always surprising and beautifully strange - so it was a surreal dream collaboration for us to work with him and to become the subjects of one of his films,” said Nick Rhodes. “When we first discussed the notion of working together, we bonded over a shared desire to create a truly unique live film. I felt confident we could rely upon David to conjure up something stylish, experimental, handmade and innovative. He surpassed all of our wildest expectations.”

Duran Duran is one of the most ground-breaking British bands of the last three decades. With over 100 million records sold, 30 UK Top 20 hits, 18 American hit singles, and six prestigious ‘Lifetime Achievement Awards’ from MTVVMAs, the BRITS, the IVOR NOVELLOS, Q Magazine, the Spanish Ondas, and GQ Magazine, Duran Duran has shown that throughout the years, they continue to thrill with the same venerable vigor and enthusiasm of their earliest records, delivering to fans the songs they remember and new ones to love with the creative momentum to propel them into the next decade and beyond.

ABOUT SCREENVISION
Headquartered in New York, N.Y., Screenvision is a national leader in cinema advertising, offering on-screen advertising, in-lobby promotions and integrated marketing programs to national, regional and local advertisers and providing comprehensive cinema advertising representation services to top tier theatrical exhibitors presenting the highest quality movie-going experience. The Screenvision cinema advertising network is comprised of over 14,200 screens in 2,200+ theater locations across all 50 states and 94% of DMAs nationwide; delivering through more than 150 theatrical circuits, including 6 of the top 10 exhibitor companies. For more information: http://www.screenvision.com.

ABOUT PHASE 4 FILMS
Phase 4 Films (www.phase4films.com) is one of the leading full service independent studios. With offices in ten cities in the U.S. and Canada, Phase 4 provides a full range of services relating to the sales, marketing, licensing and distribution of feature films, television and special interest content across all media in the North American market. Its recent release includes A Night in Old Mexico starring Robert Duvall and the Jay-Z documentary Made in America, directed by Ron Howard. Upcoming releases include Fort Bliss with Michelle Monaghan and Catch Hell, starring and directed by Ryan Phillippe. Its dedicated kids & family label, kaboom! Entertainment, is one of the most recognizable brands in the market.