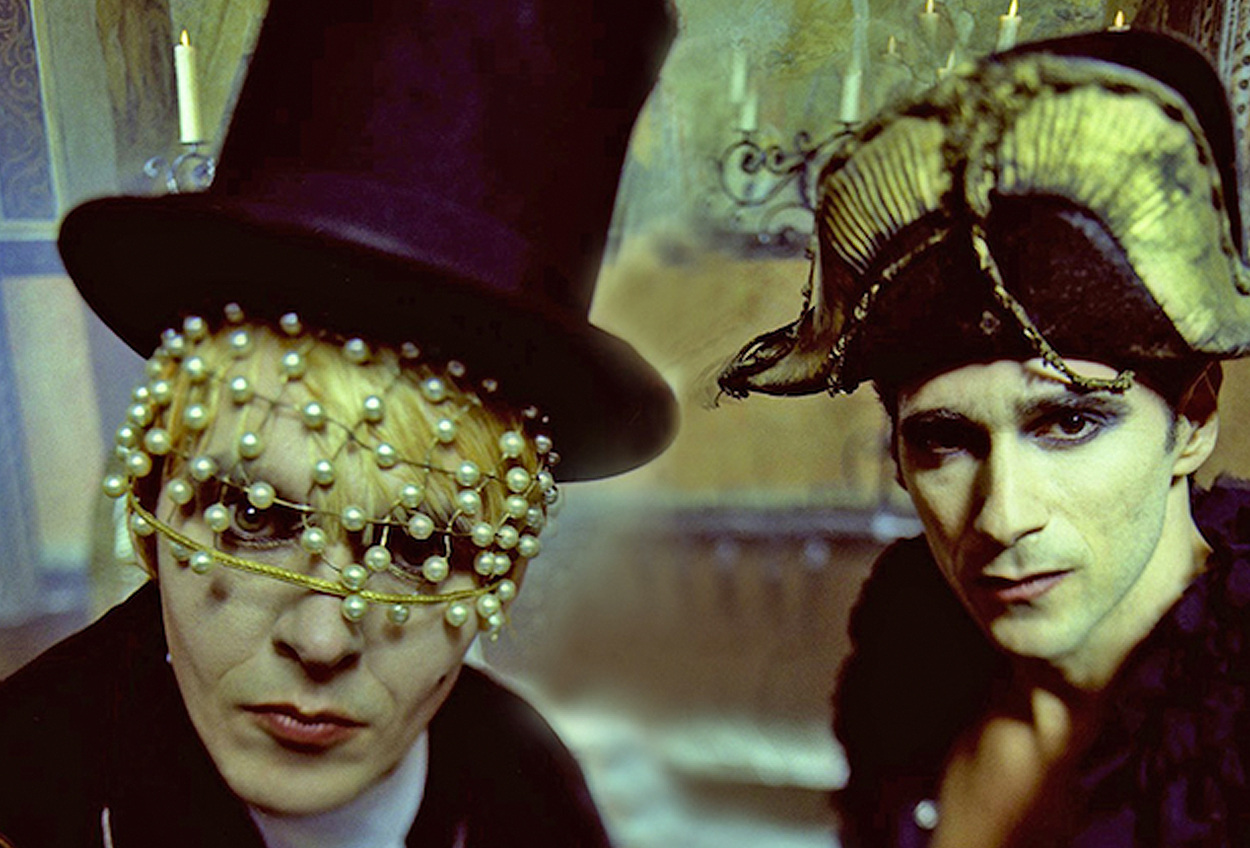 Trust members of Duran Duran to record an album so innovative, it would be 16 years till it became mainstream...

Imagine making an album set in the future then losing it, only to discover it 16 years later when the future it foretold is happening. As strange as it sounds this is what happened to Duran Duran keyboardist Nick Rhodes and their former guitarist Warren Cuccurullo, collectively known as TV Mania. Their album Bored with Prozac and the Internet? has finally been released, 16 years after it was recorded, back then they were ahead of their time both musically and in envisioning what the future would be like. However, for both of them predicting future trends in music and technology is something they’re long used to.

You probably wouldn’t guess this but Duran Duran were actually the first band to release a downloadable single, Electric Barbarella. It was back in 1997 when the music industry was still figuring out how to make the internet work for them that Duran decided to try the digital single “when we did it, it was like, ‘wow by 1998 everybody in the worlds going to be doing this’,” said Nick “ITunes didn’t even go up until 2000.” Unfortunately not everyone was supportive of the move including the bands record label, but especially the retailers. “The record company was furious,” said Nick, “Capitol in America didn’t want to do it, EMI in the UK said ‘we’re ok with that’, and then in the end we persuaded Capitol, but they said, ‘look the retailers are not going to like this at all’, and they were right about America because we got banned by every major chain, they refused to stock the record,” he continued. But did you ever think that, 16 years later we’d be in this position where it looks as if HMV is finished and the physical single is gone also? “No, but I think the stores definitely feared that at the time, because what they were so horrified about was the possibility that artists could go straight to the public. I don’t even think that at the time they were worried about an ITunes, or a record label doing it themselves,” he answered. “They were worried about artists doing it, and of course that isn’t what transpired, Apple just managed to go in and seize the market because they did it so beautifully. The retailers were right obviously to fear what was coming in the future.”

But Nick isn’t here today to talk about Duran Duran, though of course I’ll have to ask later. Instead he’s unveiling his latest project, TV Mania, collaboration between himself and former Duran guitarist Warren Cuccurullo. Their album Bored with Prozac and the Internet? is finally being released, after spending 16 years missing in Nick’s vast archives. Nick recently found the master tape “in an old drawer, a little DAT tape, labelled, ‘TV Mania- master’”. The album had been made when Duran Duran were taking a break from recording Medazzaland, an album which Warren and Nick produced under the TV Mania moniker. Whilst watching television the pair became fascinated by a fashion programme where the subjects appeared to be talking in song titles. They decided to start recording sound bites from the show using a VHS recorder, then loading it into a computer and then putting that into a keyboard. Their collection of samples soon started to turn into songs and although Nick was no stranger to using samples, this time the process was different. “When we’d used samples prior to the TV Mania project, we’d have a song and Nick would go, ‘oh I’ve got a great sample I want to stick at the front of that song’,” Warren explained, “but to take it the other way around, to write a song around a sample would be quite different, but that’s what we did for TV Mania.” As the songs started to grow, they began taking samples from more than just the original show and with their horizon broadened they even ended up sampling from such unexpected sources as The Outer Limits. “We had so much fun, I’d never laughed so much making a record,” Nick smiled.” It was just pure joy when we found something.”

Once they had the songs, there was just the matter of finding a thread to tie them together, and that’s when the strangeness began. The thread they came up with turned out to be an eerily prophetic vision of the future and the society we’re living in today. “We tied these songs together and wove this tale which foretold reality television basically,” said Warren. “We got the idea that there was this incredibly dysfunctional family, and they were based on sort of real stereotypes. The mother was a pill head, the father was a religious freak, the daughter was just obsessed with wanting to be famous for anything and the son was a video game freak and a hacker. So they were sort of all the things that were starting to be in our society a little bit more at that point,” Nick explained. “But it was 1996; it was pre any reality stuff.” So what was it in 1996 that made you think that we might become a society that was so obsessed with reality and each other’s lives? “You knew with what was happening with surveillance, cameras coming down in size, everything else, that people were going to be doing more and more of this observing people, watching people,” Nick answered. “But we of course did not foresee the likes of Big Brother.” However, their ideas about what the future could hold were, unbeknownst to them being shared by more than a few other creative individuals. Six months after the album was completed Hollywood managed to scoop them when The Truman Show came out, “we hadn’t put the album out yet and Warren and I said, ‘wow, there goes that idea’,” said Nick. “I’d love to say we were the only people thinking of it.” So for the time being the concept was gone, but the songs were still there to be released, that’s if the record company allowed; “the record label listened to the album and they thought we were sort of Martians. They just said, ‘are you kidding me?’” said Nick. “They were waiting for their Duran Duran album, these beautifully crafted songs, and Warren and I came in with a bunch of samples from TV and some funny old rhythm units, and some noise that was pieced together like a William Burroughs story, and so they just said, no that’s not for us.”

So over the next 16 years other priorities took over, the Medazzaland album was finished, then came Pop Trash, both underrated classics, and then in 2001 the original Duran line-up reunited and Warren went back to America. So now in 2013 the world is finally getting to hear Bored with Prozac and the Internet? and hopefully they’re ready for it. The album is unlike anything you’ll have heard before, and for something that was recorded 16 years ago it’s as relevant and modern as anything else you’ll hear all year. The album is of course available for download, but there is also a beautiful gatefold vinyl edition. So you’re obviously not ready to go 100% digital yet? “No definitely not.” Said Nick “We are of course releasing a digital version but what we aren’t doing at the moment is a CD. I think that format is sort of falling between everything. The vinyl will sound 100% better to me than the digital release, but we’re making the digital one as good as we can possibly make it for downloads.”

Now that the album has finally been released, there’s a lot more to come from TV Mania. “What I’m really excited about having is the first Nick Rhodes directed music video, Beautiful Clothes” said Warren. Yes amazingly Nick has never tried his hand at directing a music video before. “I did it at the same time that I did the photos for the packaging. It’s nearly done,” he said. The other thing which is really exciting them at the minute is TV Mania’s involvement in Second Life. “We’ve actually created the family and they live in Second Life, in the compound, as we imagined it,” said Nick. Which means Bored with Prozac and the Internet will literally be coming to life albeit, virtually, “it’s just too TV Mania for words,” Warren continues, “and to see the family speaking, running around its amazing. They’re just starting it, so we can actually have this little soap opera we envisioned, this sitcom, we can have it existing in Second Life. “Perhaps the most interesting part in the next chapter of TV Mania is the idea to franchise it out to others wishing to create their own versions. “Once it’s up and running, you can then take it and put it in any format. It will be available for garage bands, it will be available for pro tools, and you can then do the same thing that we did, but with your own take on it.” explained Warren. “You can do anything you want, as long as you stick to the manifesto. I think it’s a really fun, creative thing, it’s that kind of project, it inspires further creativity.”

So now that Nick has finally been able to release the TV Mania album, what about his main project Duran Duran? Well work is beginning on their next album, where they will once again collaborate with producer Mark Ronson, “what’s good about him is he gets the roots of what Duran Duran is about. The sort of pop culture that we draw from, the music we grew up with, the music that we like now, the groove stuff; he’s a very talented guy,” said Nick. This next album will be the bands 14th as Duran Duran enter into their 35th year. So what is it about the band that Nick founded back in 1978 that has given them such longevity? “I don’t know. I always remember Mick Jagger saying to me, when I met him early on in our career, ‘what you’ve got to do is you’ve got to stick at it, you’ve got to turn up, show up and that’s half the battle’; and I think really what it means is, you have to believe it and keep believing it because some times are not as easy as others.” said Nick “Sometimes you have to really work a lot harder to bring something to realisation, and other times it comes easy, and so if you’re in the mind set where you are able to accept that, and you like the people you’re working with or the sounds you’re making then I think that helps make it work. I like everybody in the band, we’re friends, we’ve had an amazing time in the band and we had an amazing time with Warren in the band.” So after 35 years in the music industry, Nick Rhodes is definitely not ready to slow down, even anything he’s pushing forward even more. With the TV Mania album and a new Duran record being recorded, it’s still as exciting to be a Duran Duran fan in 2013 as it ever was.

Previous Article
Duran Duran’s Roger Taylor Trades the Skins for the Decks
Next Article
John Taylor in Copenhagen – Media Links!
News
Back to all news