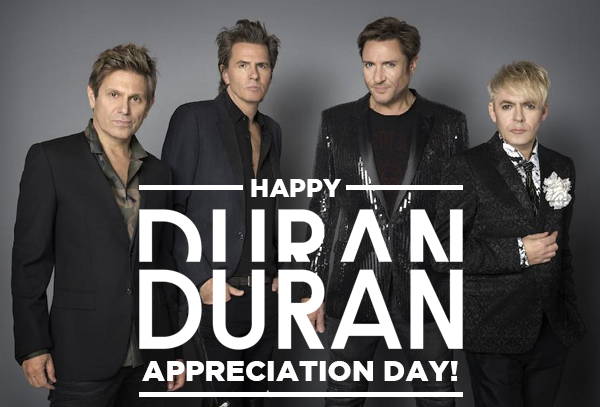 How amazing to be celebrating another Duran Duran Appreciation Day! Last night, on stage in Saratoga, I was looking out into the crowd thinking how lucky we are, to have the fans we have. Your extraordinary enthusiasm has given us so much energy this year, brought us back from the brink, almost, last summer, to a far, far better place than we have been in for years.

DDA is a celebration of YOU and US, and the relationships that make up this fantastic journey we continue to share. To celebrate,there are two small offerings from the band; a short film shot as we were preparing to go onstage for the BT Olympic Opening Ceremony Celebration in Hyde Park; and a special remix of 'The Man Who Stole a Leopard' by Gosteffects that I love…

You can get more details about all of that below.

We're now on the last leg of what has become a quite lengthy AYNIN World tour. We're going to miss the juice, the buzz and the connectedness come the last date in Ontario September 1. But September/October sees the release of 'In The Pleasure Groove'- for a little more insight into the band you love- and I'll be out and about promoting that.

We'll be back at it in the London studio early 2013 writing new material, and maybe, maybe.. more shows next summer.

It has never been more fun to be in Duran Duran, and more than ever, that's down to your continued support and passion.

The Man Who Stole A Leopard (Gosteffects Remix)

Previous Article
A Video from Nick for Duran Duran Appreciation Day, 2012
Next Article
Hello My Name is Roger
News
Back to all news